MyCompanies Wiki
Register
Don't have an account?
Sign In
Advertisement
in: Companies founded in 1914, Companies of Michigan, Companies of Plymouth, MI.,
and 3 more

Alter automobiles were sold locally through the Alter Motor Sale Company in Kalamazoo, Michigan among other dealers in other states.

NOTE: Atler car production began in August 1914. Some models were marketed as 1914s. 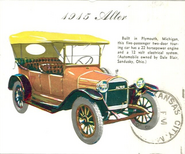