MyCompanies Wiki
Register
Don't have an account?
Sign In
Advertisement
in: Companies founded in 1855, Companies of Connecticut, Companies of Hartford, CT.,
and 4 more

In 1955, the firm was acquired by the Penn-Texas Corporation. Penn-Texas changed its name to Colt Industries in 1964, and Colt's became the Firearms Division. In 1989 the division was acquired by the CF Holding Corporation, a group of investors led by Shared Technologies, Inc. The company filed for bankruptcy in 1992 and was purchased by a partnership headed by Zilkha & Company. In 2002, Colt Defense LLC was spun off and the New Colt Holding Corporation, LLC was formed as a holding concern. In 2005 it was acquired by Sciens Capital Management LLC. Colt Defense purchased New Colt in 2013. Colt's again entered bankruptcy in June 2015 and exited in January 2016, owned by Cannae Holdings, Inc. 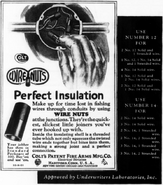