MyCompanies Wiki
Register
Don't have an account?
Sign In
Advertisement
in: Companies founded in 1893, Companies of Ohio, Companies of Leetonia, OH.,
and 2 more

The Crescent Machine Company was founded in 1893 (incorporated 1905) by Elmer Harrold and Clinton G. Wilderson in Leetonia, Ohio. Its industry was woodworking machinery and its headquarters remained in Leetonia, Ohio. In 1945, the company was acquired by the Pittsburgh Equitable Meter & Manufacturing Company. That company, later renamed Rockwell Manufacturing in 1946, continued to sell Crescent machinery until the Leetonia plant was shut down in 1953 and most of the "Crescent" brand was sold to the William K. Stamets Company. 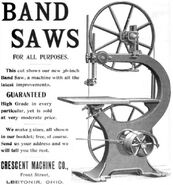 Popular Mechanics (May 1931)
Community content is available under CC-BY-SA unless otherwise noted.
Advertisement