MyCompanies Wiki
Register
Don't have an account?
Sign In
Advertisement
in: Companies founded in 1848, Companies of Connecticut, Companies of Ansonia, CT., Accumulators

It was acquired by the USM Corporation in 1968, becoming a division known as the Farrel Machinery Group. In 1976, both companies were merged with the Emhart Corporation. It was acquired by private investors in 1986. In 2009, the firm was acquired by L. Possehl & Company and was integrated into its HF Mixing Group in 2010. Today, it does business by the name Farrel Pomini, a joint operation comprised of the Farrel Corp. and POMINI Rubber & Plastics srl. 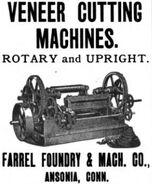