The Gurney Refrigerator Company was founded in 1890 in Oshkosh, Wisconsin however its factory moved to Fond Du Lac, Wisconsin later in 1890. Its industry was refrigerators. Its fate is unknown, however the last trace of the company is from 1928. There are no known records, but it has been known to have non-ice box fridges which were made as late as May of 1975. 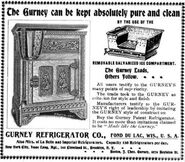 American Builder (March 1925)
Add a photo to this gallery
Retrieved from "https://mycompanies.fandom.com/wiki/Gurney_Refrigerator_Company?oldid=17888"
Community content is available under CC-BY-SA unless otherwise noted.