MyCompanies Wiki
Register
Don't have an account?
Sign In
Advertisement
in: Companies founded in 1881, Companies of New York, Companies of Oneida, NY.,
and 2 more

Oneida, Ltd. was founded on January 1, 1881 by John H. Noyes and members of the Oneida Community in Oneida, New York. It's industry is tableware and its headquarters were in Oneida, New York (1880-2017) and Lancaster, Ohio (2017-present). The company filed for bankruptcy in 2006 and was acquired by Monarch Alternative Capital. In 2011, it was acquired by Monomoy Capital Partners who merged it with Anchor Hocking LLC in 2012, forming EveryWare Global Inc. as a holding company. 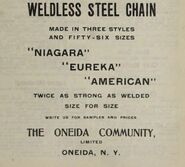 From the 1909 edition of Hendrick's Commercial Register