The Tudhope-Anderson Company, Ltd. was founded in the 1900s (sources say 1902, 1905, and 1910) by James B. Tudhope and Harry Anderson in Orillia, Ontario. Its industry was transportation seating (previously toys and originally farm equipment) and its headquarters remained in Orillia, Ontario. It went bankrupt in the mid 1920s and was sold to the Royal Bank of Canada. In 1936, Ross W. Phelps purchased the company, renamed it, and changed its industry to toys in the 1940s. In 1961, Otaco became a division of Bartaco Industries until being sold to Redlaw Industries in 1984. A year later it was sold to the American Seating Company. It went defunct in 2007. 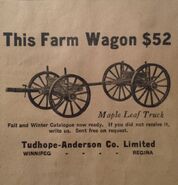 (1923)
Community content is available under CC-BY-SA unless otherwise noted.