MyCompanies Wiki
Register
Don't have an account?
Sign In
Advertisement
in: Companies founded in 1872, Companies of Illinois, Companies of Rockford, IL.,
and 6 more

November 1998
The W. F. & John Barnes Company was founded in 1872 (incorporated 1884) by William F. and John Barnes in Rockford, Illinois. Its industry was (originally woodworking machinery) custom-built machinery, machine tools, electrical, hydraulic and mechanical controls and systems, and nuclear hardware. Its headquarters were in Rockford, Illinois (1872-1984) and Rochester, Michigan (1984-1998).

The company was acquired by the Babcock & Wilcox Company in 1963 and was operated as its automated machine division. In 1982, it was sold to Acme Precision Products, Inc. and in 1998 was acquired by LeBlond Ltd. 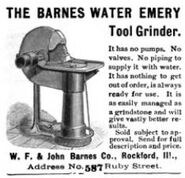 From the 1905-1906 edition of Thomas' Register of American Manufacturers