In 1958, the firm was acquired by Textron, Inc. and was operated as the Waterbury Farrel Division. Its operations were moved to Cheshire, Connecticut in 1960, and its machinery and equipment in Waterbury were acquired by the Turner & Seymour Manufacturing Company in 1960. 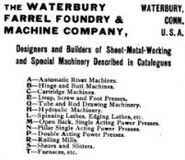 The Iron Age (May 1, 1913)
Community content is available under CC-BY-SA unless otherwise noted.
Advertisement