In 1894, the company sold its crane department to the Brown Hoisting Machinery Company. In 1963, the firm was acquired by the Eaton Manufacturing Company and operated as a division. It was merged into Eaton in 1966, which became Eaton, Yale & Towne, Inc.

In 1984 the operation was reformed as Yale Materials Handling Corporation.

The Ohio Architect and Builder (January 1905) 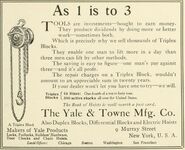 The Journal of the American Society of Mechanical Engineers (January 1911)